More than a year ago I took part in a competition organized by Deuter, which they held in seven countries around the world and invited three participants from each. As you already understood, I was one of the lucky ones and I visited Germany in September this year. Despite the fact that we were organized the whole adventure travel (which I will tell you in the next article), we visited the head office of Deuter, a company that produces some of the most famous backpacks. For me, the acquaintance with the brand and its members was main point of the trip. So, the story will start from the second day in Germany when we were brought to the office to listen about all stages of creating backpacks. 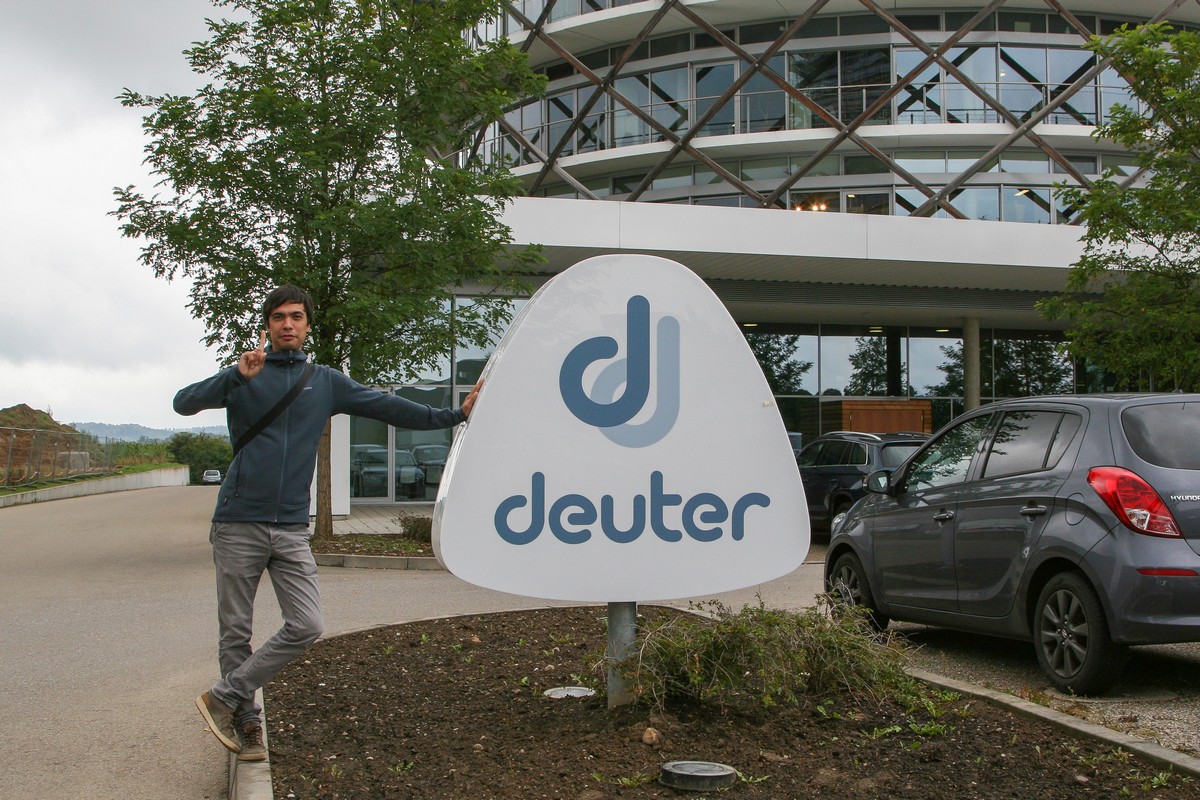 The headquarters was built specifically for the needs of the company in Augsburg. The building uses modern engineering and resource-efficient technologies, such as geothermal energy to reduce the impact on the environment, and the offices are arranged in a circle and panoramic glazed, which allows no use of electric lighting virtually. In addition, it gives good freedom of movement from one workplace to another increasing interaction between employees. Each of the four floors is given to different divisions of the company: marketers, sales Department, developers, etc. The entire first floor and a large Annex are given to warehouses. 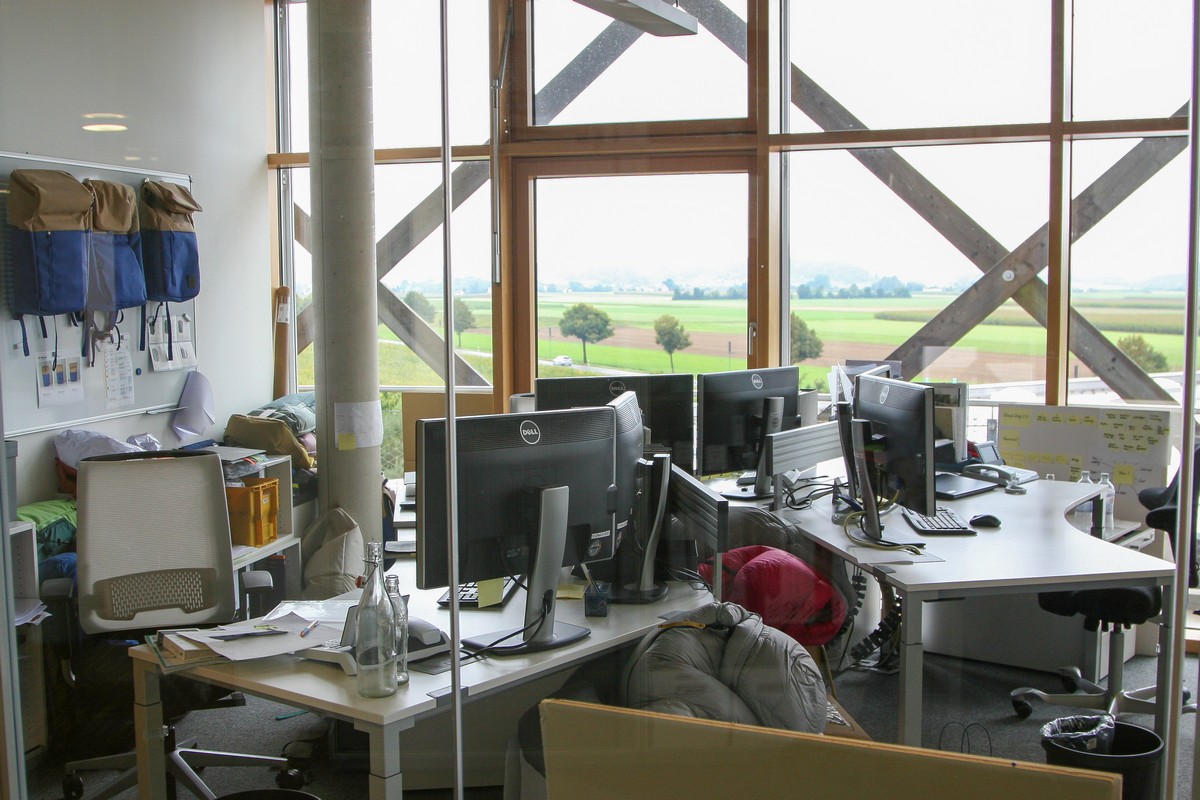 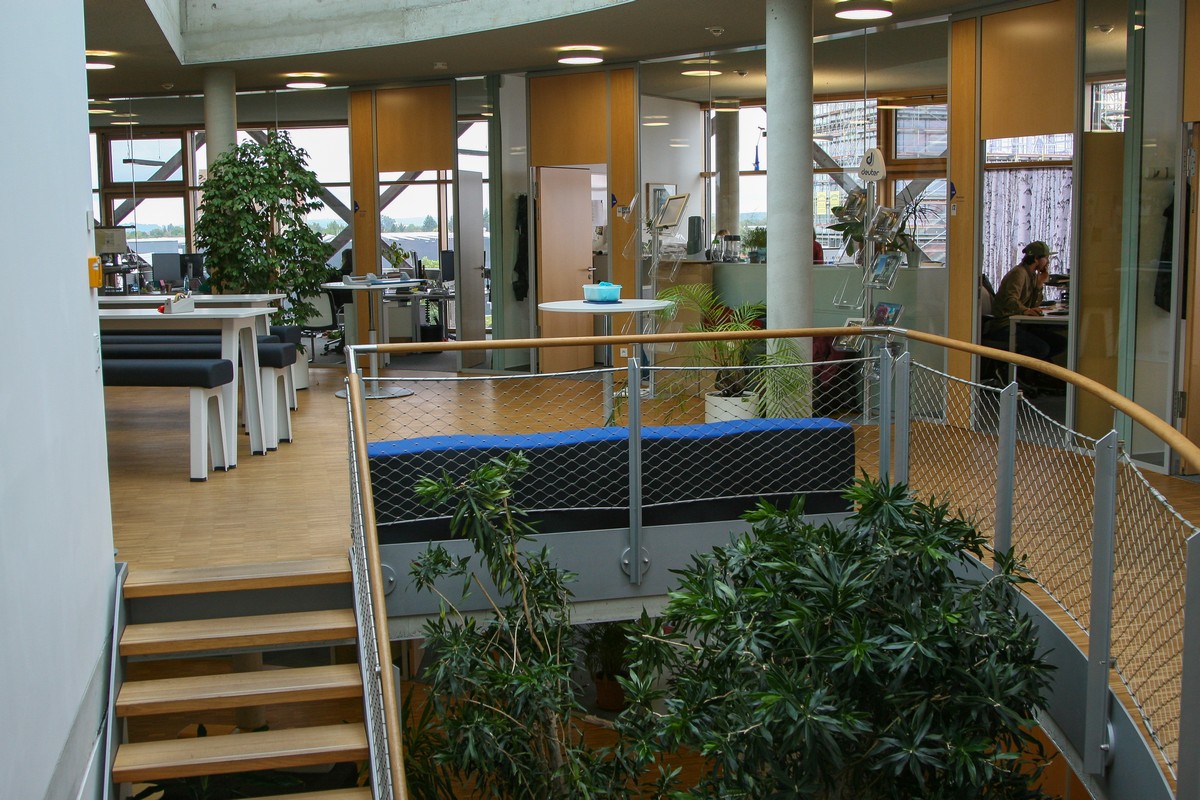 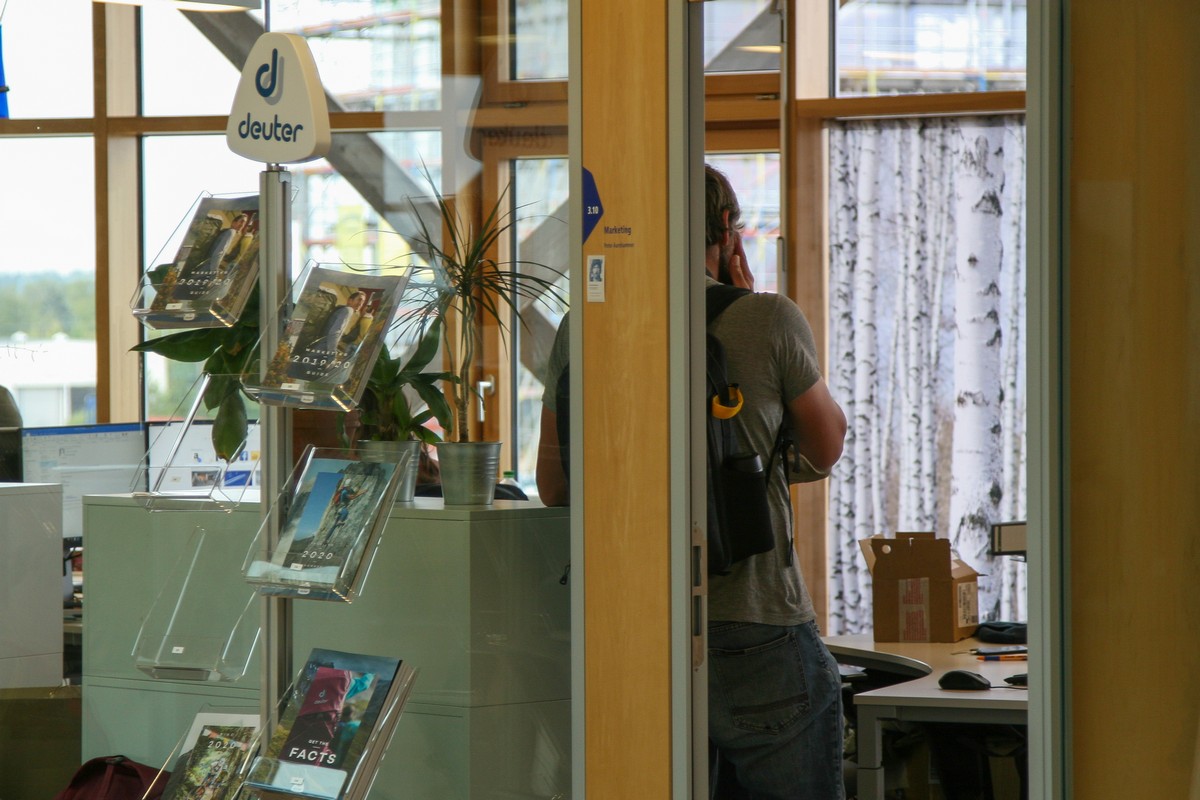 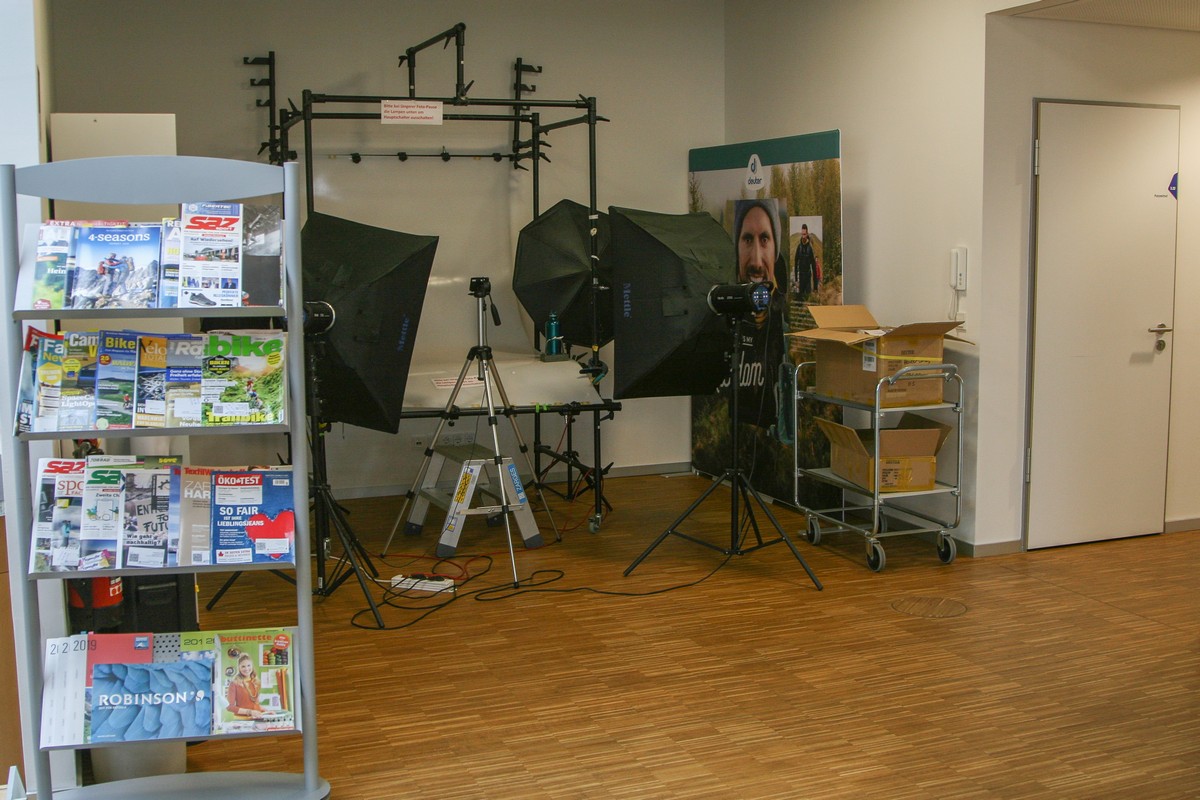 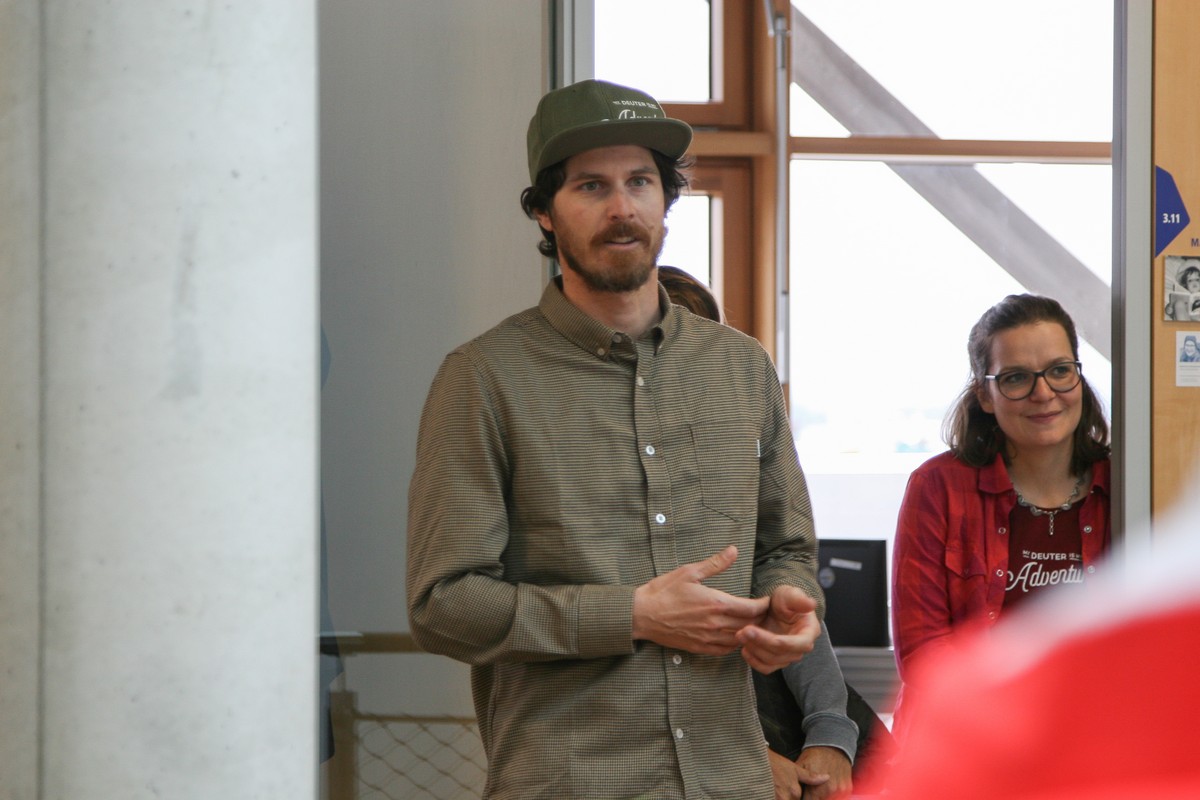 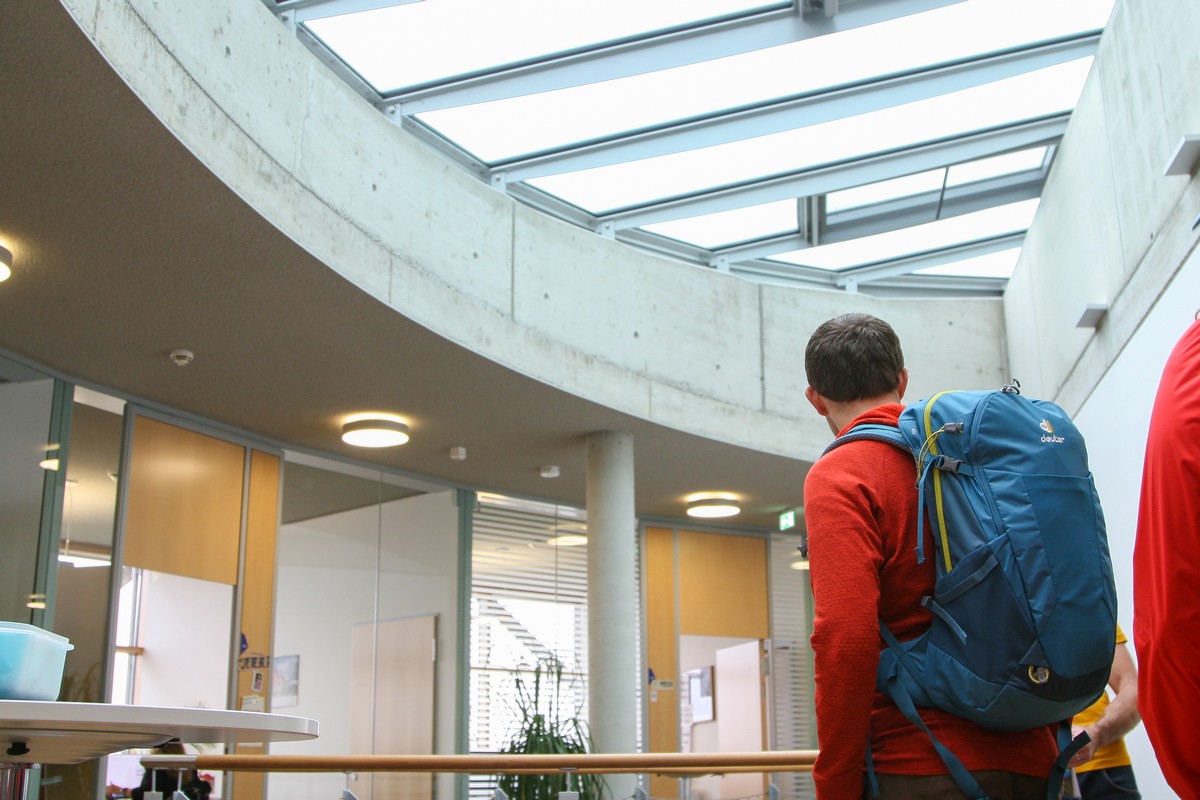 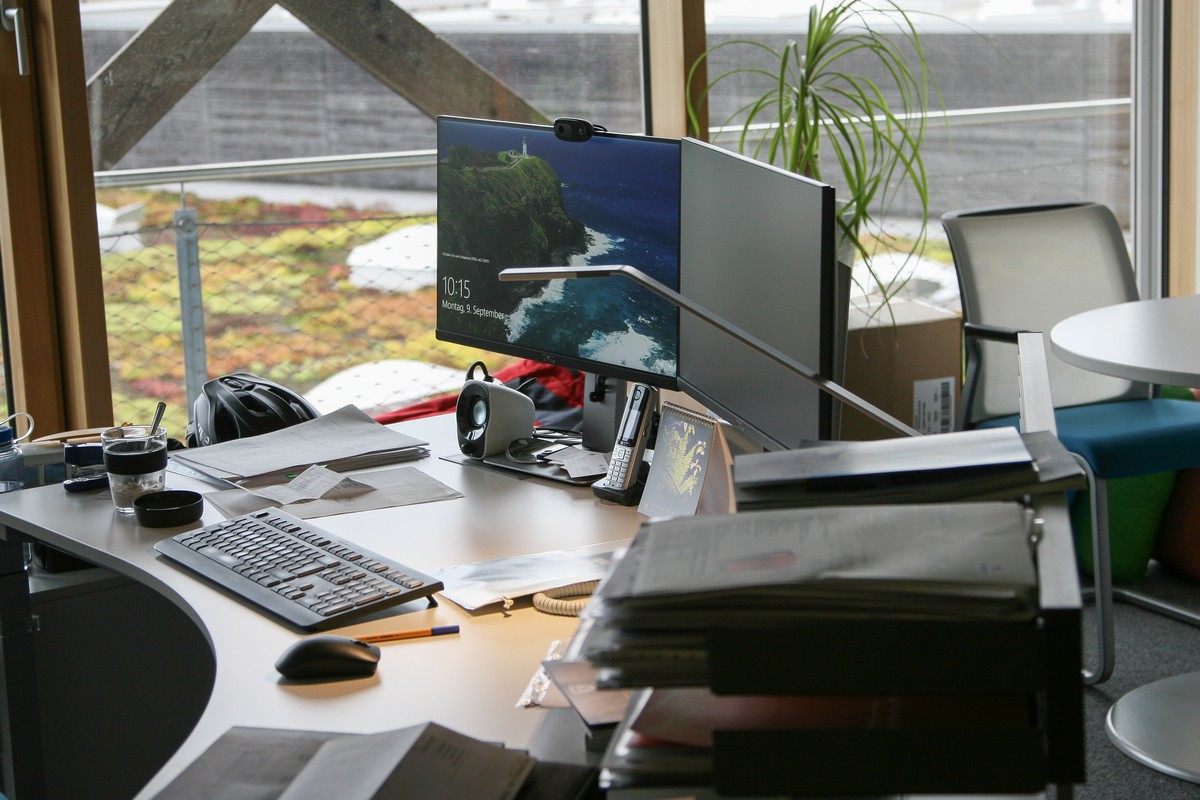 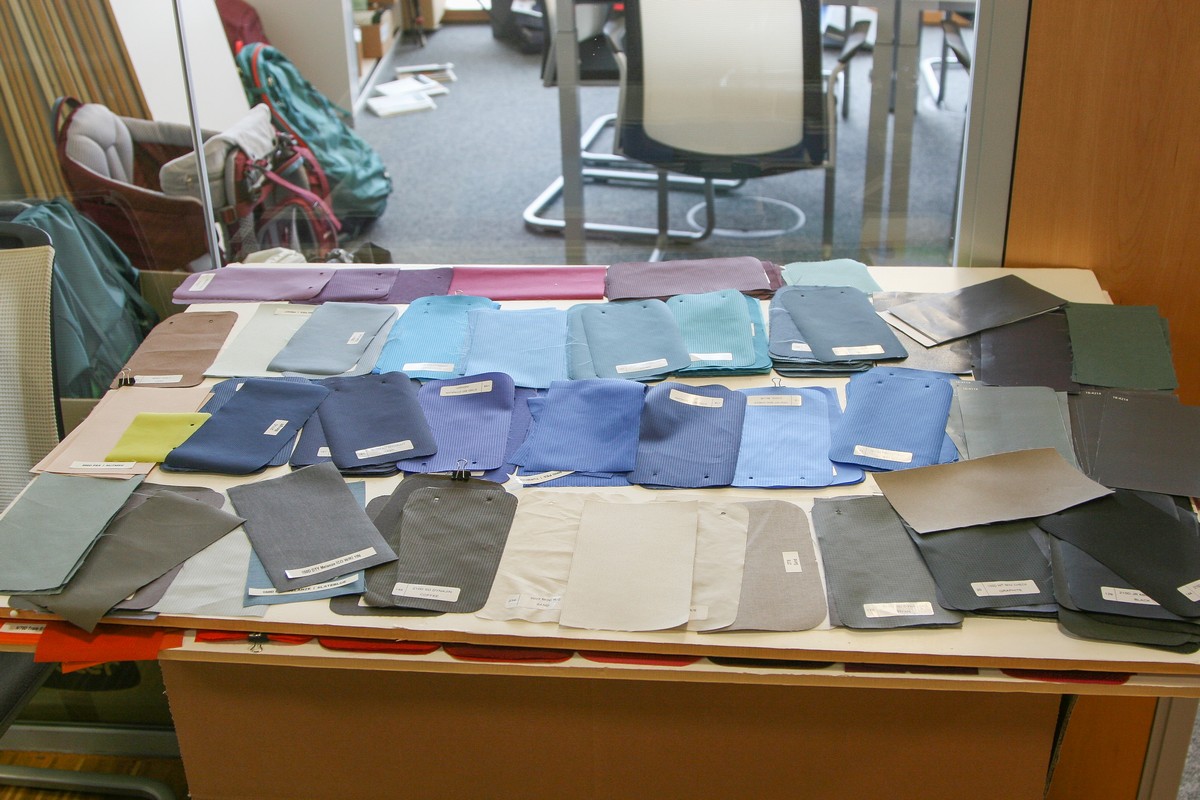 There is no production here, the head office is the brain and heart of the company, the hands are at the plant in Vietnam. However, the important fact is that the plant is 100% working only for the needs of Deuter. The factory of the Duke company (South Korean firm) is in Ho Chi Minh city, and today together with Deuter they do not represent separate existence. Deuter places its orders exclusively with Duke, and Duke, in turn, executes only Deuter orders.

Better to say, the process of creative development of backpacks is located in Germany (where we were), and physical assembly is happening on Korean factory in Vietnam (I'd like to get there too). 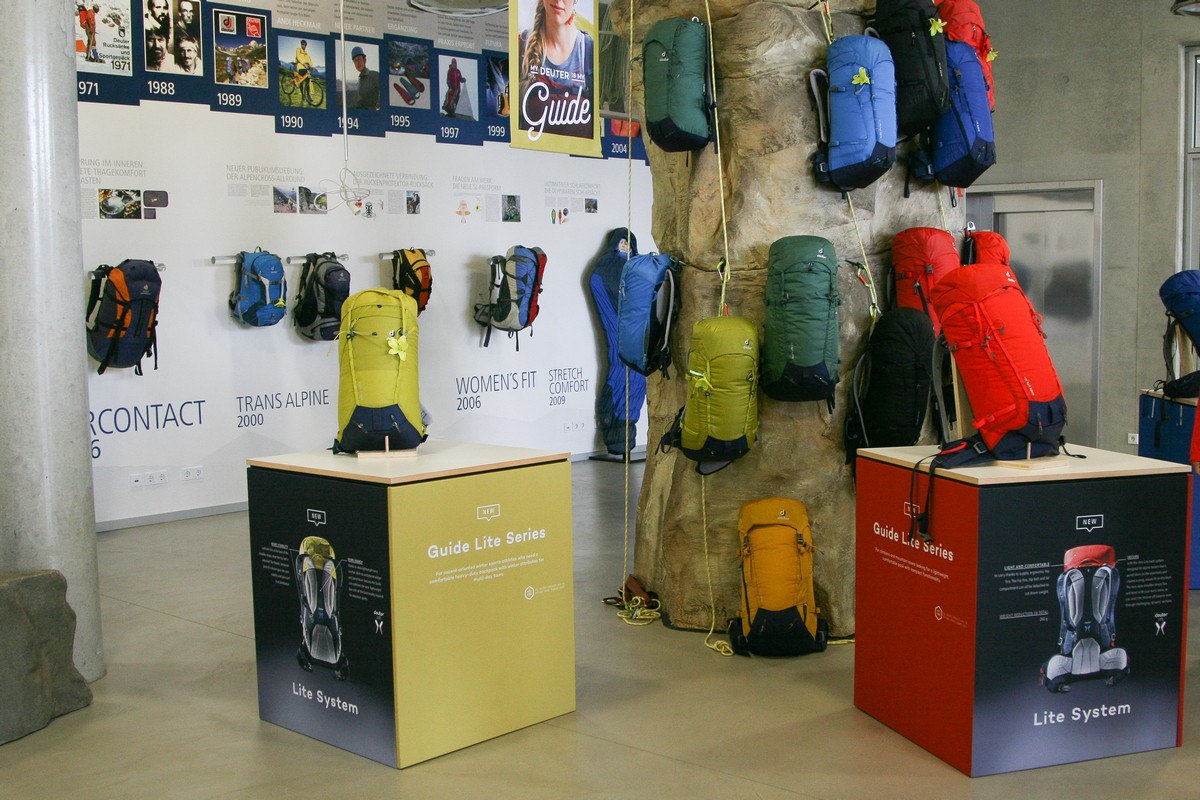 The main entrance to the building is a large hall with the achievements installation of the company which has more than 100 years history. Here the chief Executive officer told us the most important stages of the company's history. Then we were taken to all floors of the office, showed how the working processes are arranged and then we ate in the local dining room.

I really liked how the space was organized: everything was minimalistic and truly functional, all the materials in the building were natural, well-chosen, tactile and visually pleasing. I think it is very comfortable to work here, in any case, everyone with whom I was able to talk, talked about their work rather as a part in some interesting project dedicated to tourism than as a routine job. 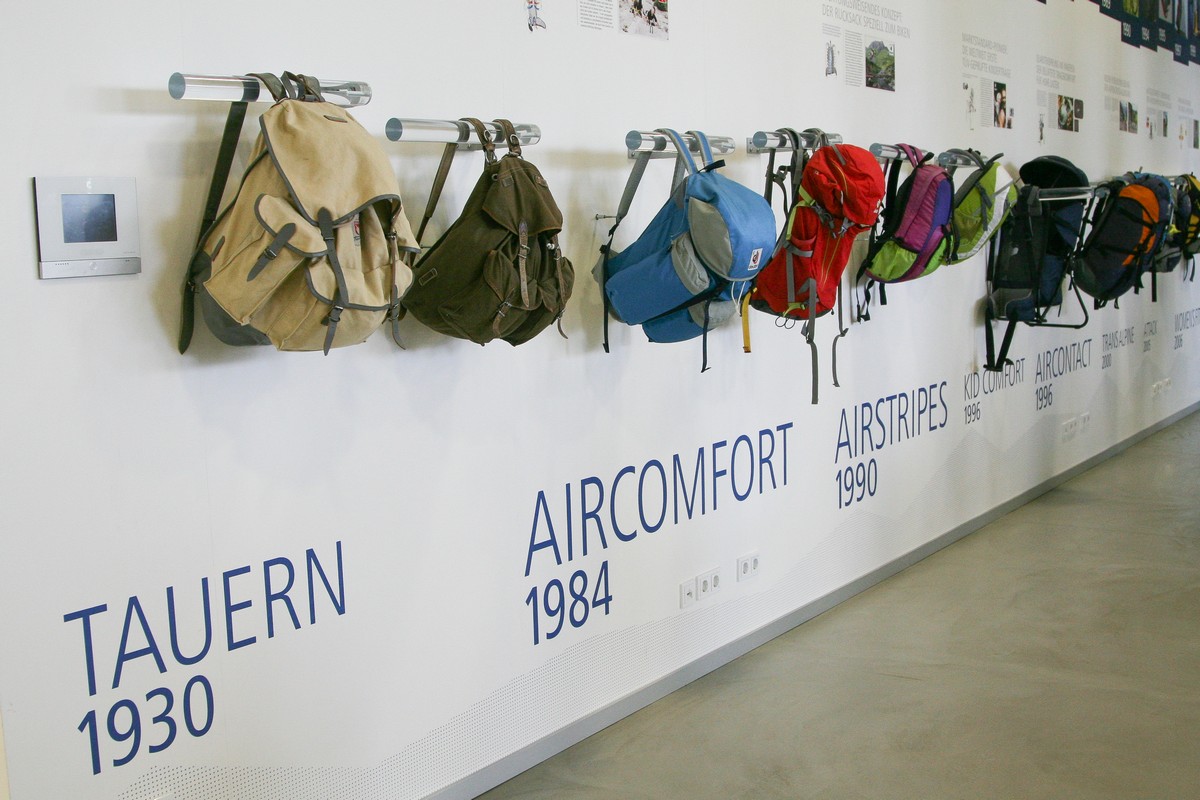 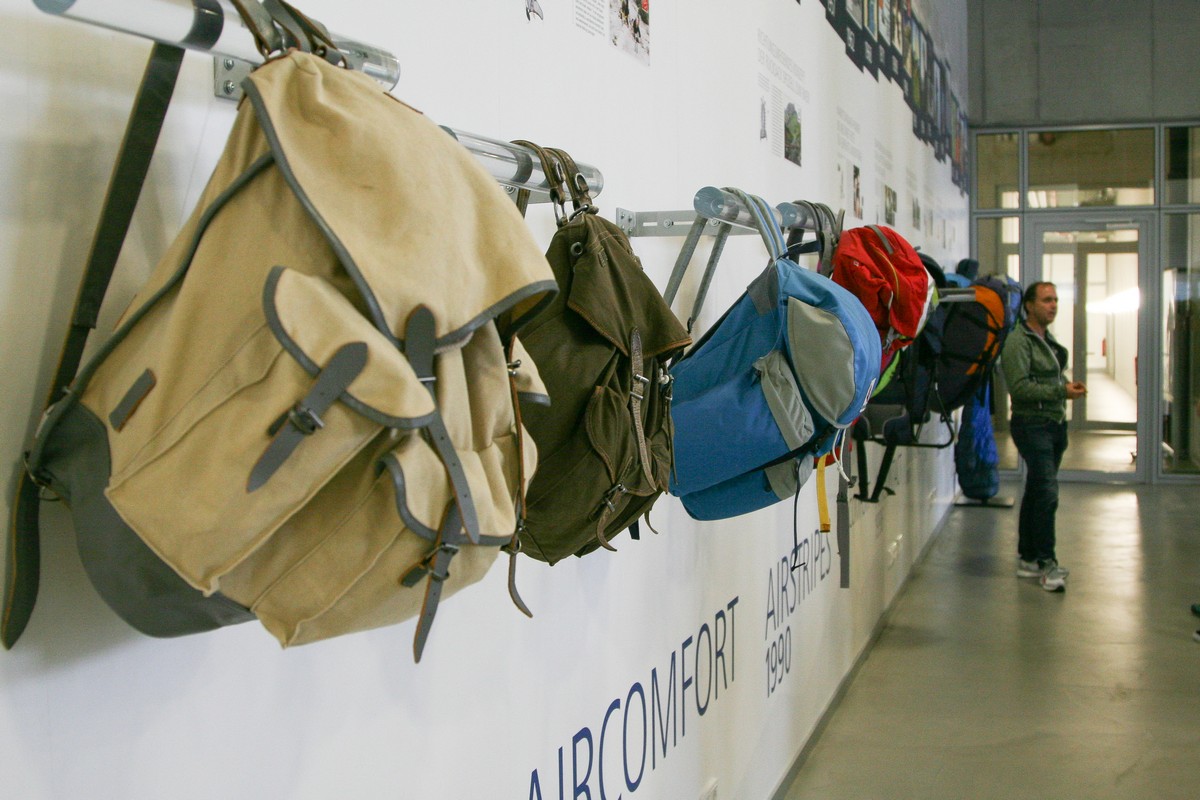 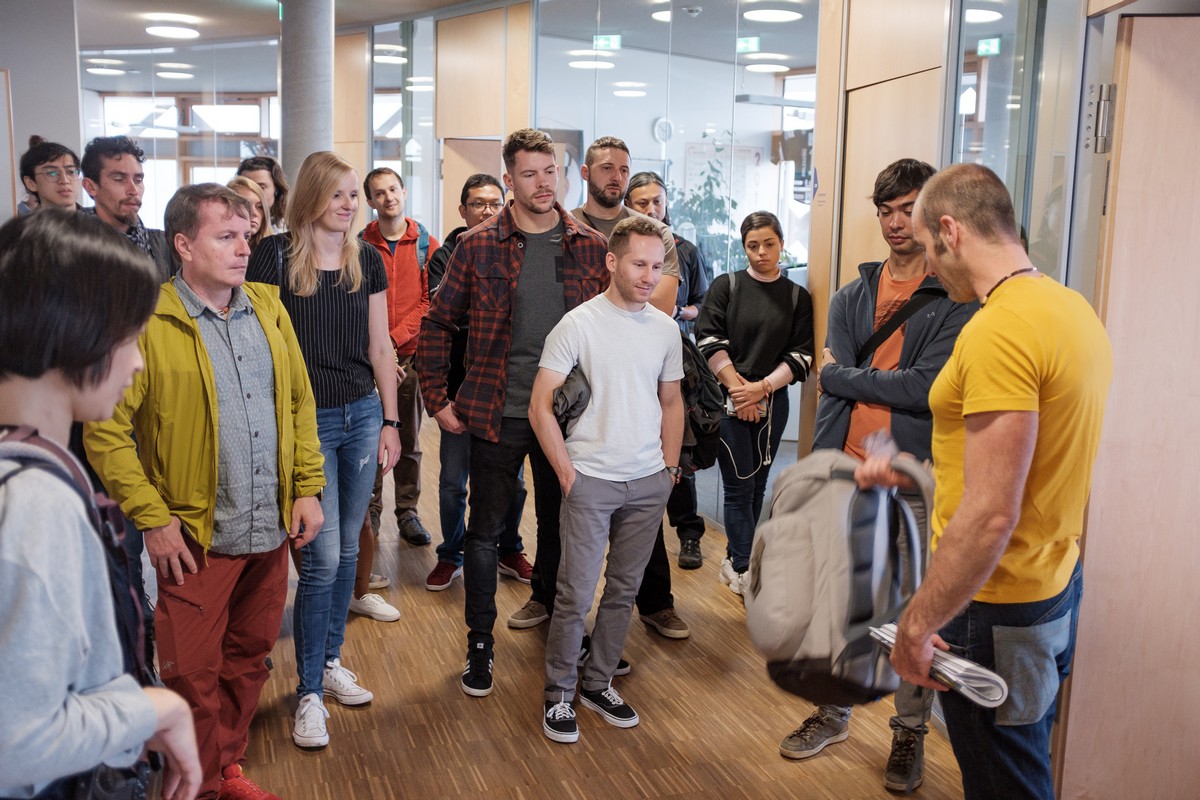 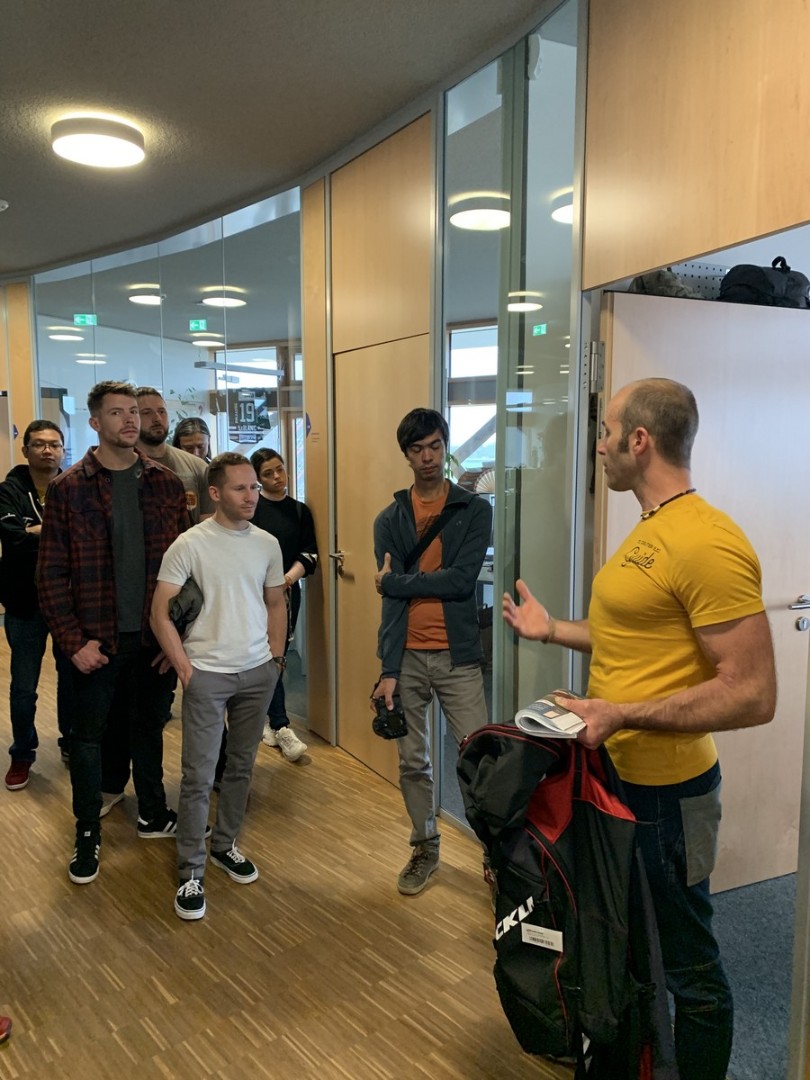 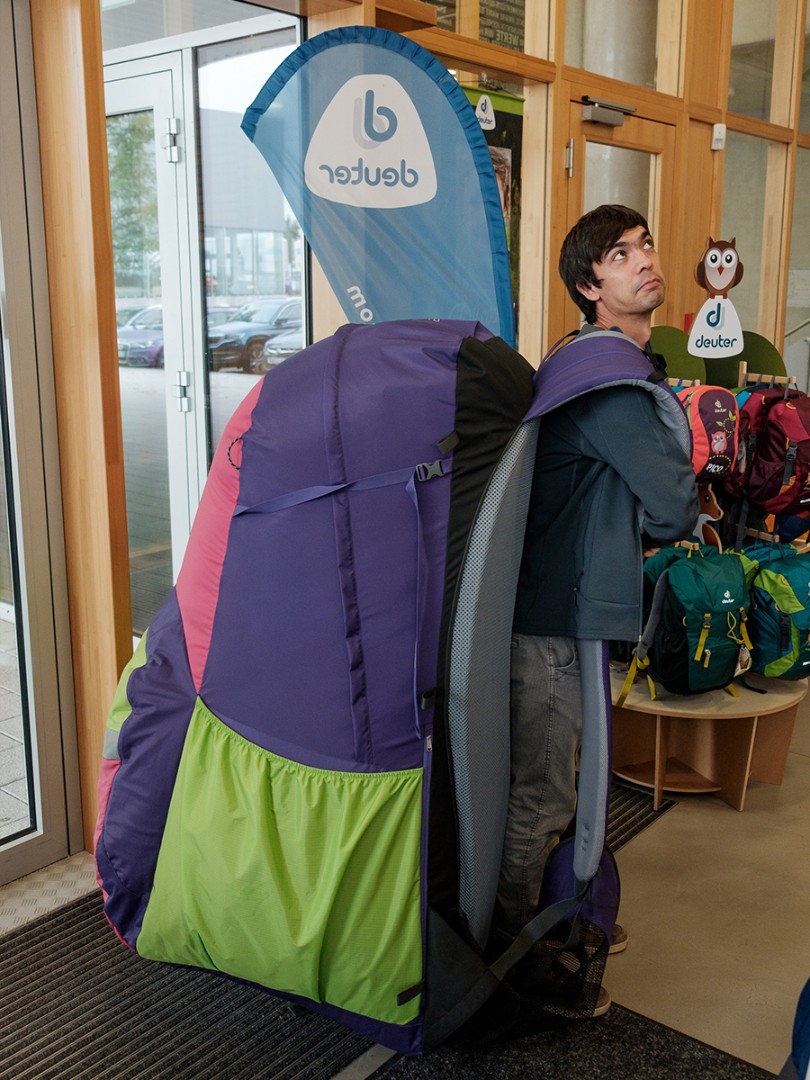 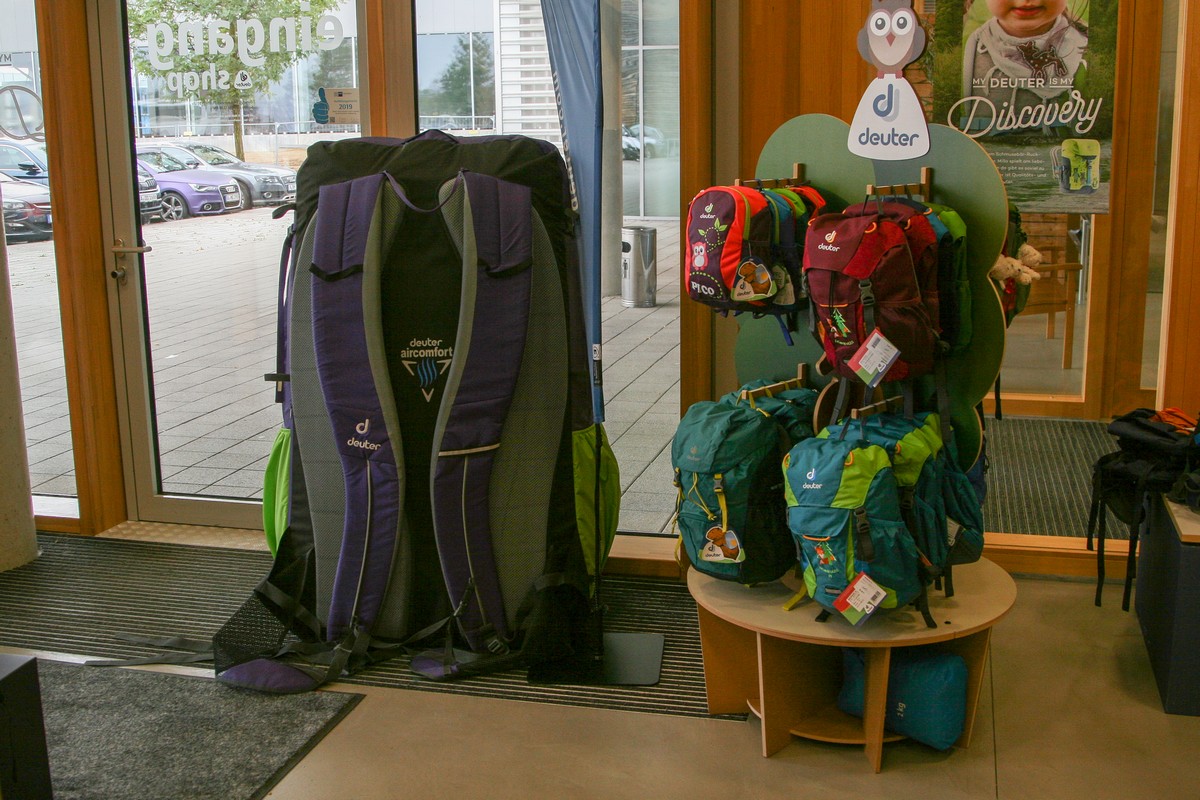 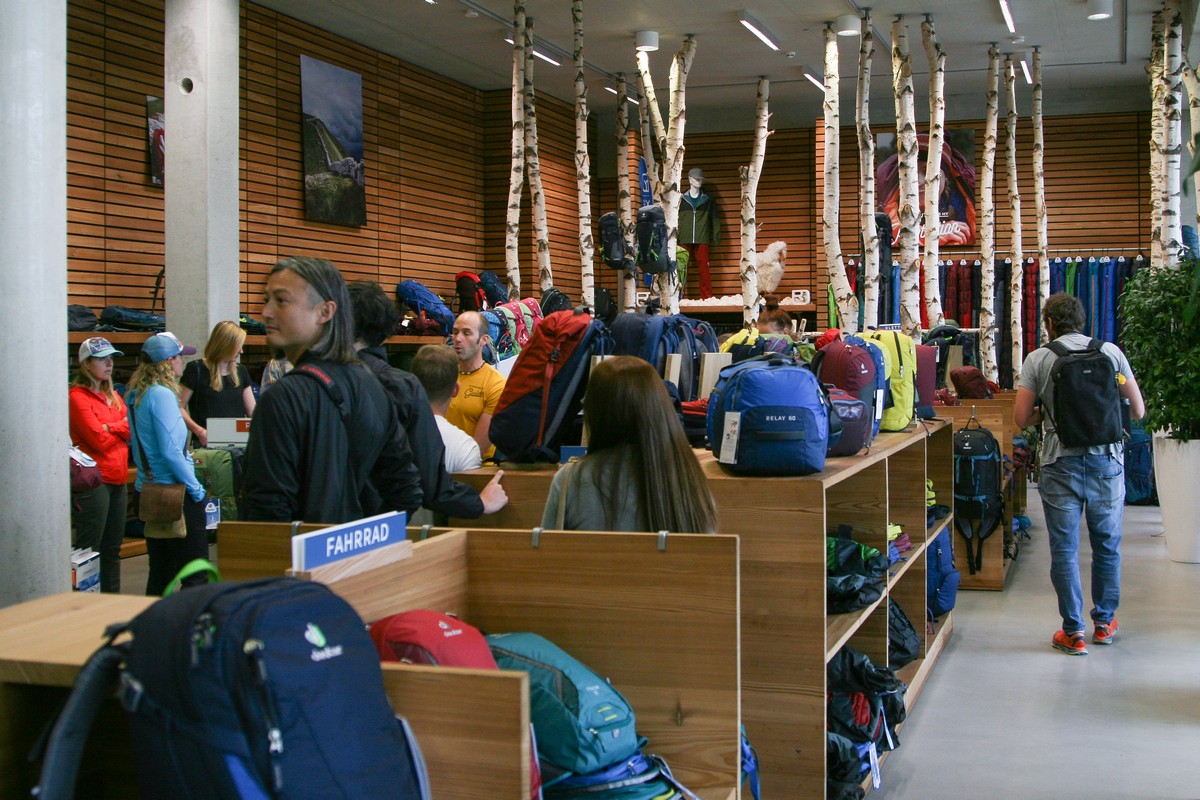 Near the main entrance there is a small showroom where you can see the most complete range today and buy something. Then we returned to the warehouse  to look at the huge shelves with products. They said the company sells more than one and a half million units of products per year. Looking at these boxes it is easy to believe in that figure.

It is curious that such a world-famous brand still considers itself a small company. Perhaps so it is, in comparison with the giants of the industry producing not only backpacks, but I was impressed by the volume of products. Although the development team is really small, and they admit that they would like to produce more specific models, but this is not enough designers.

There are several sewing machines in the building, but they are needed only for servicing backpacks. It turns out, you can send your Deuter directly to the office, and they will repair your backpack for a small fee. When we arrived, very old backpacks lay on the table. They are worn to holes with the logo of the early noughties, and we would certainly have thrown such away a long time ago, but Europeans often keep their things as long as possible. It is worth saying that the longevity of Deuter backpacks is the main component of  its success in Germany and here, in Russia, I suppose. Than we had a little fun when everyone was able to sew a small handbag of several materials to choose from. 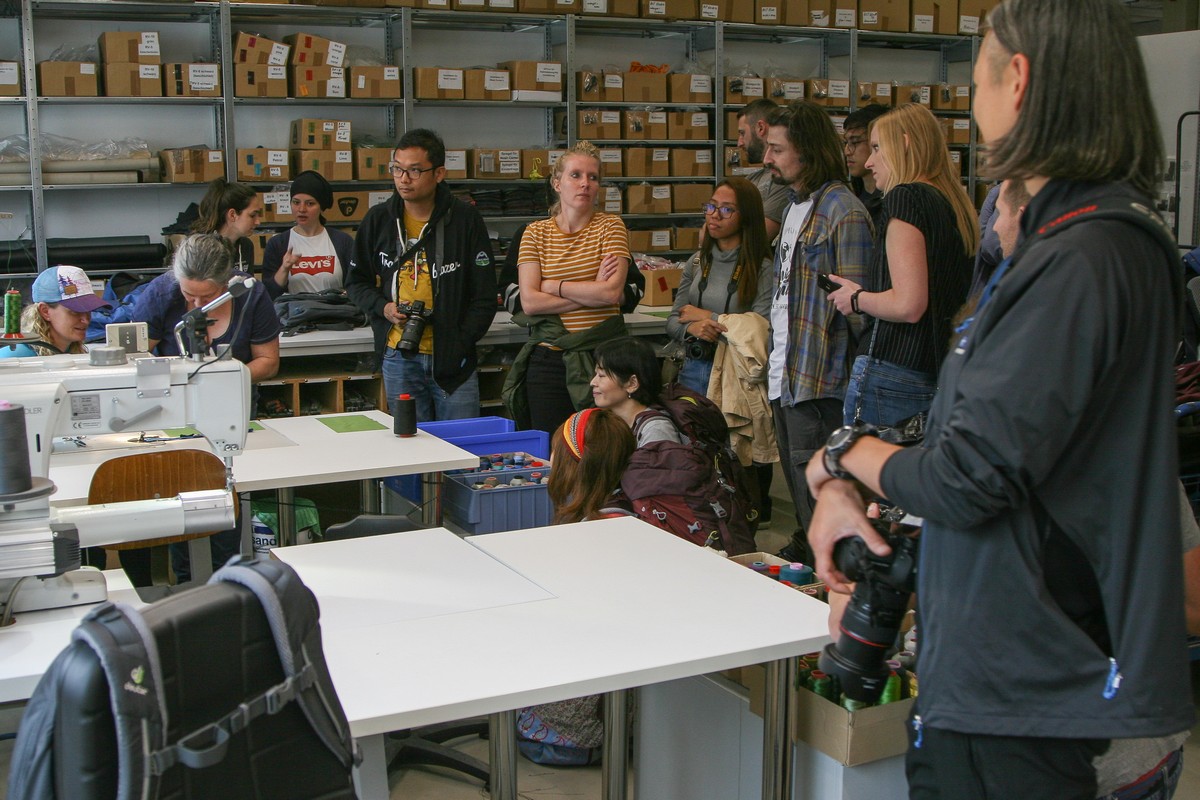 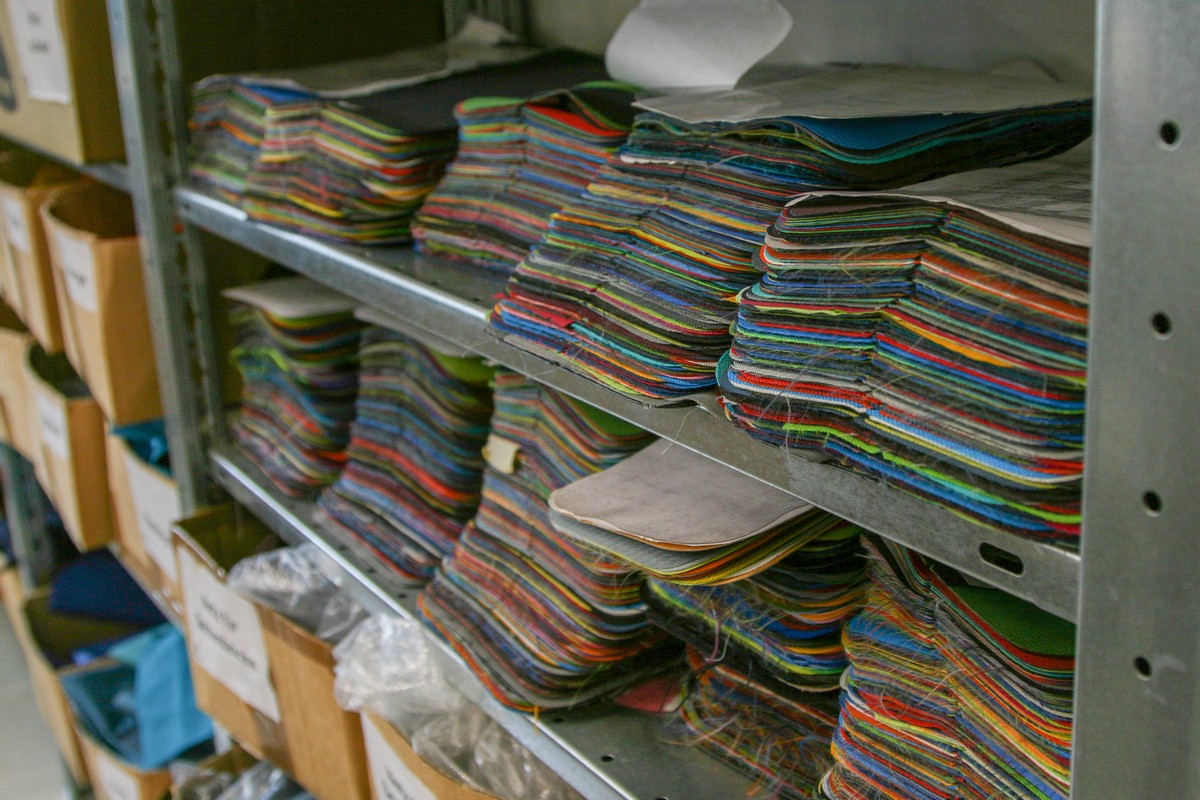 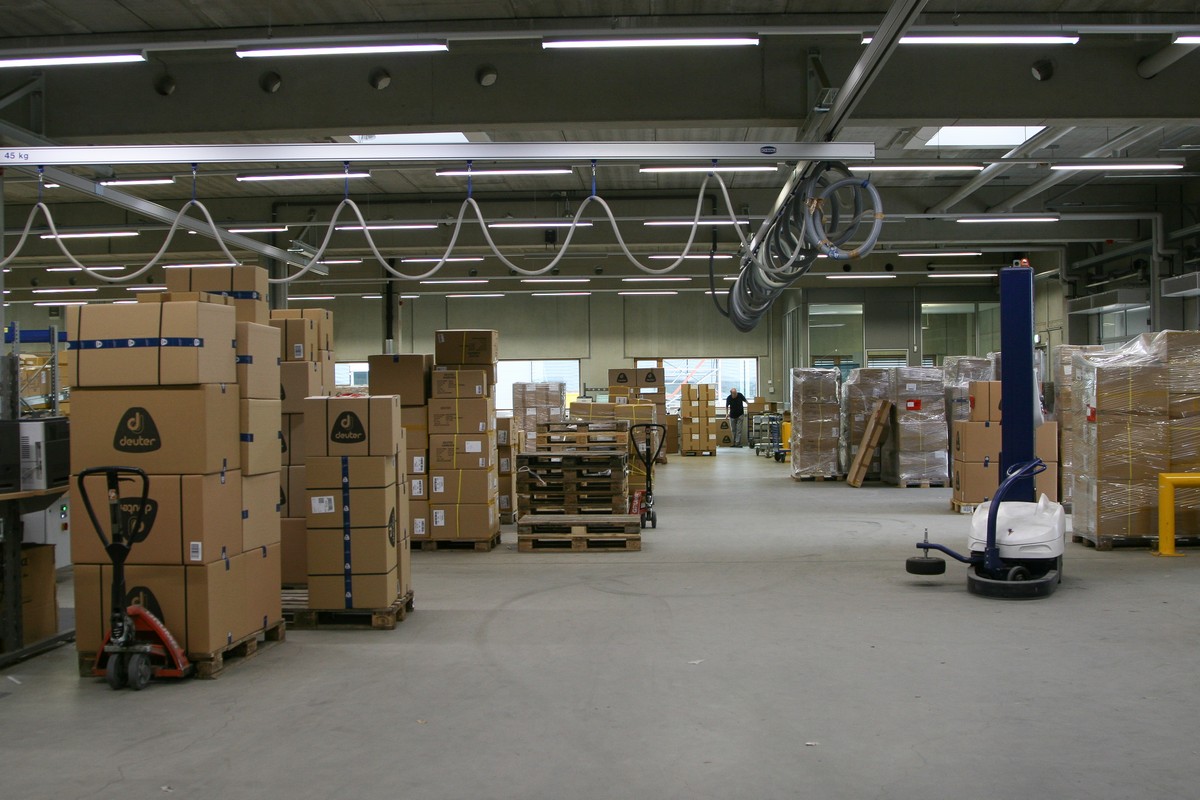 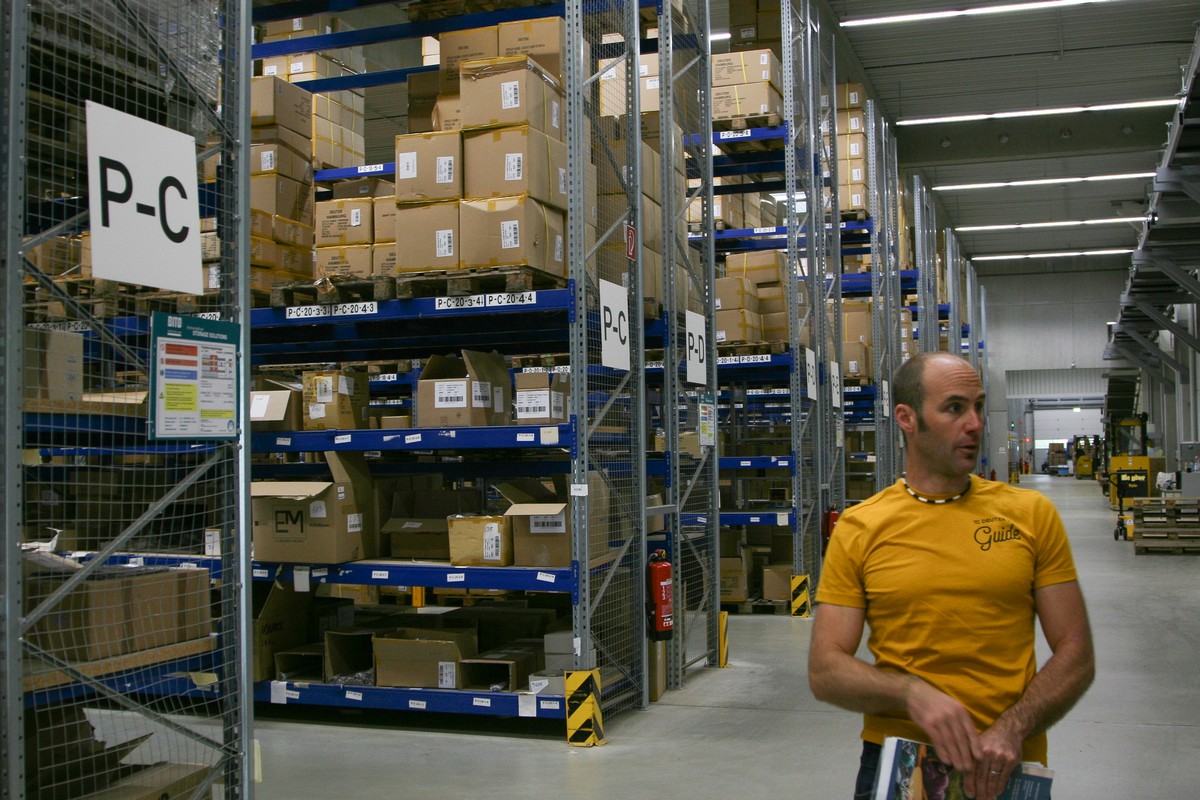 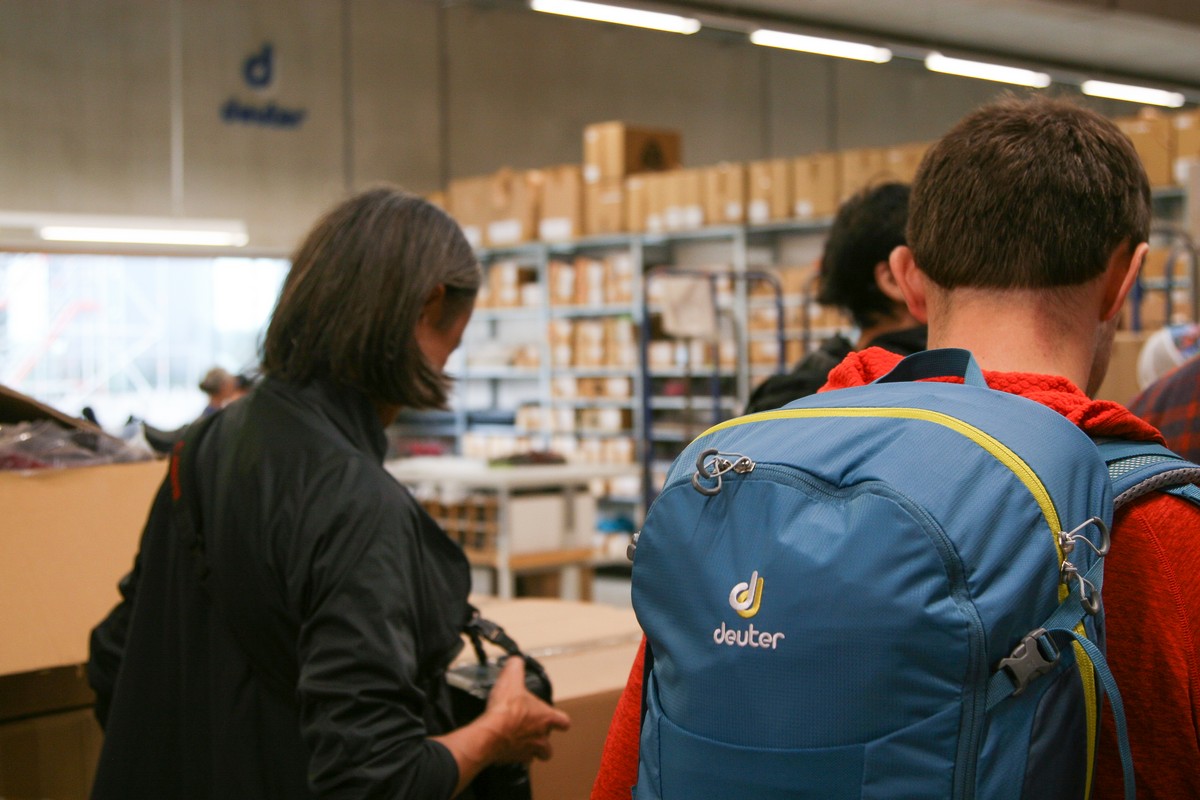 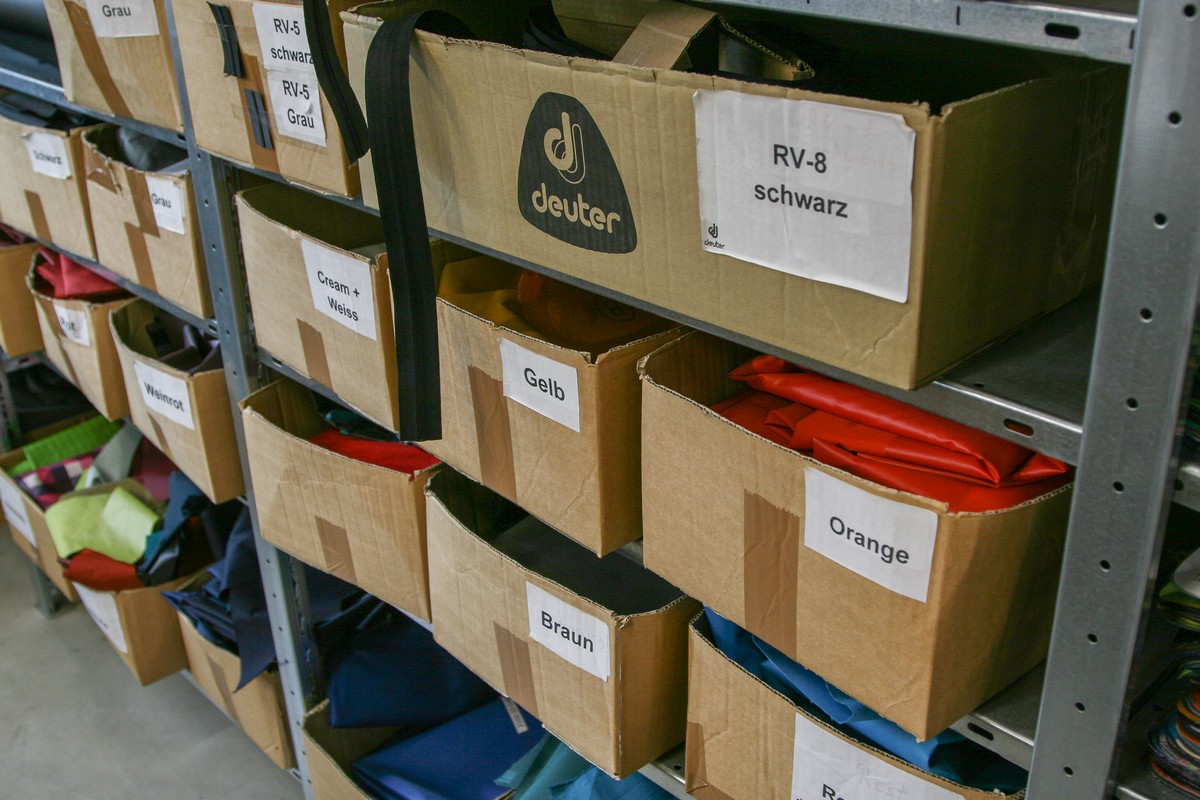 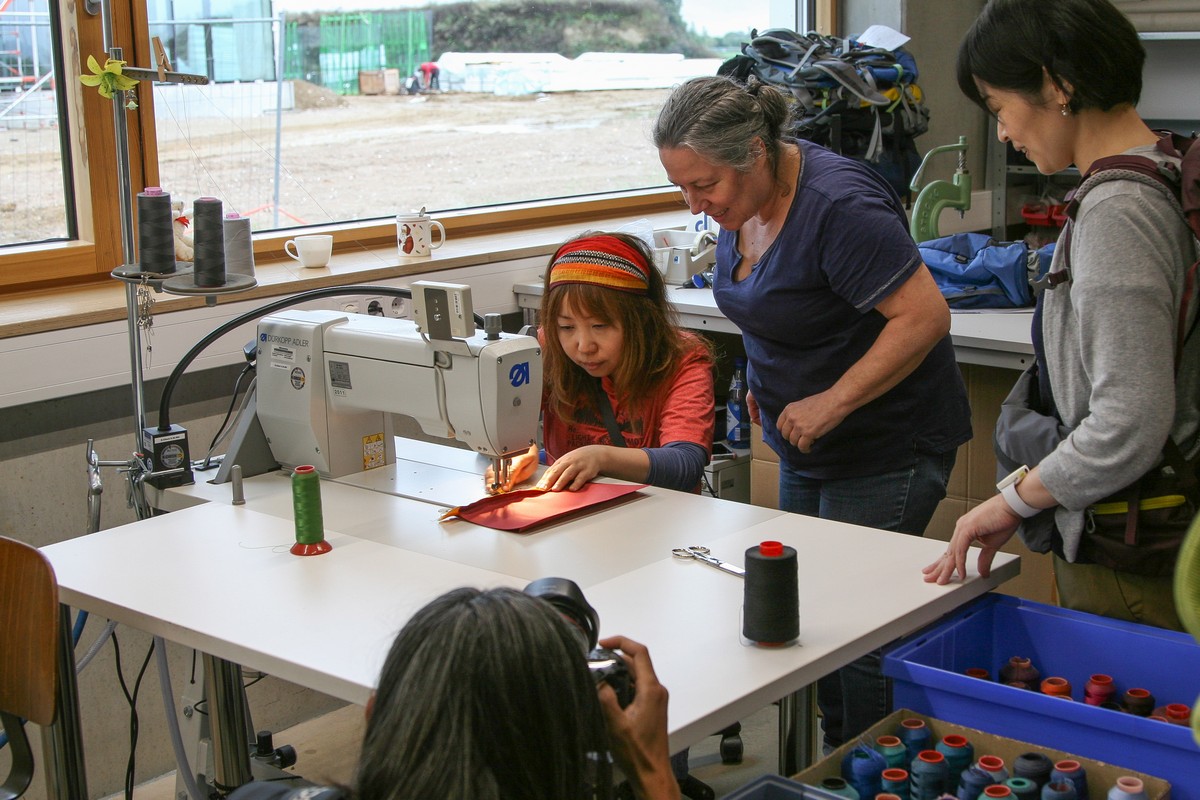 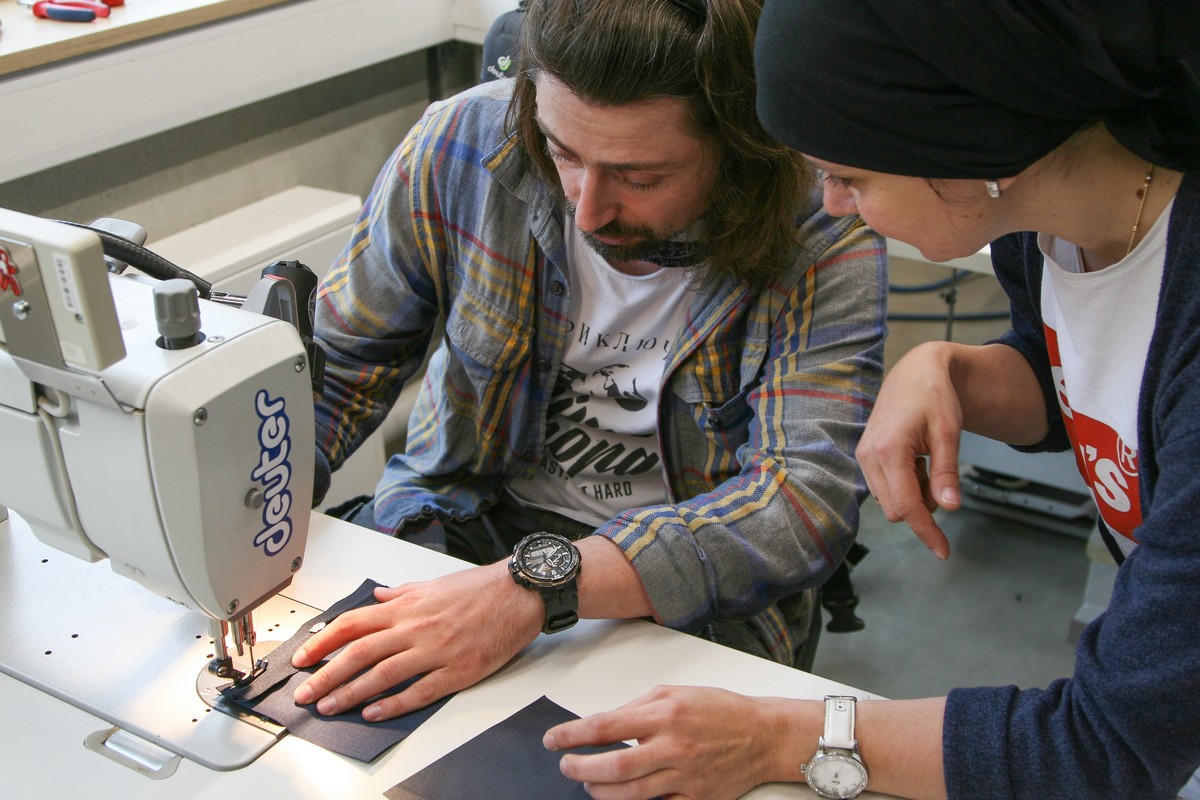 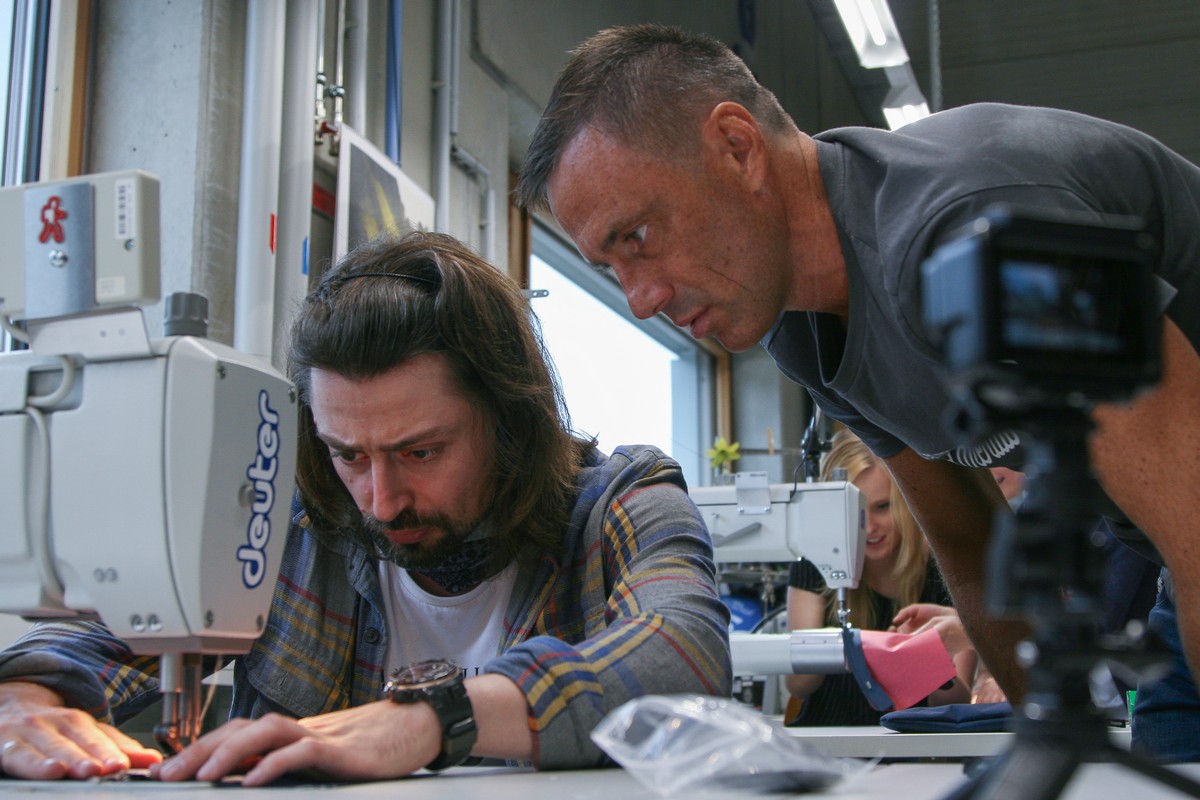 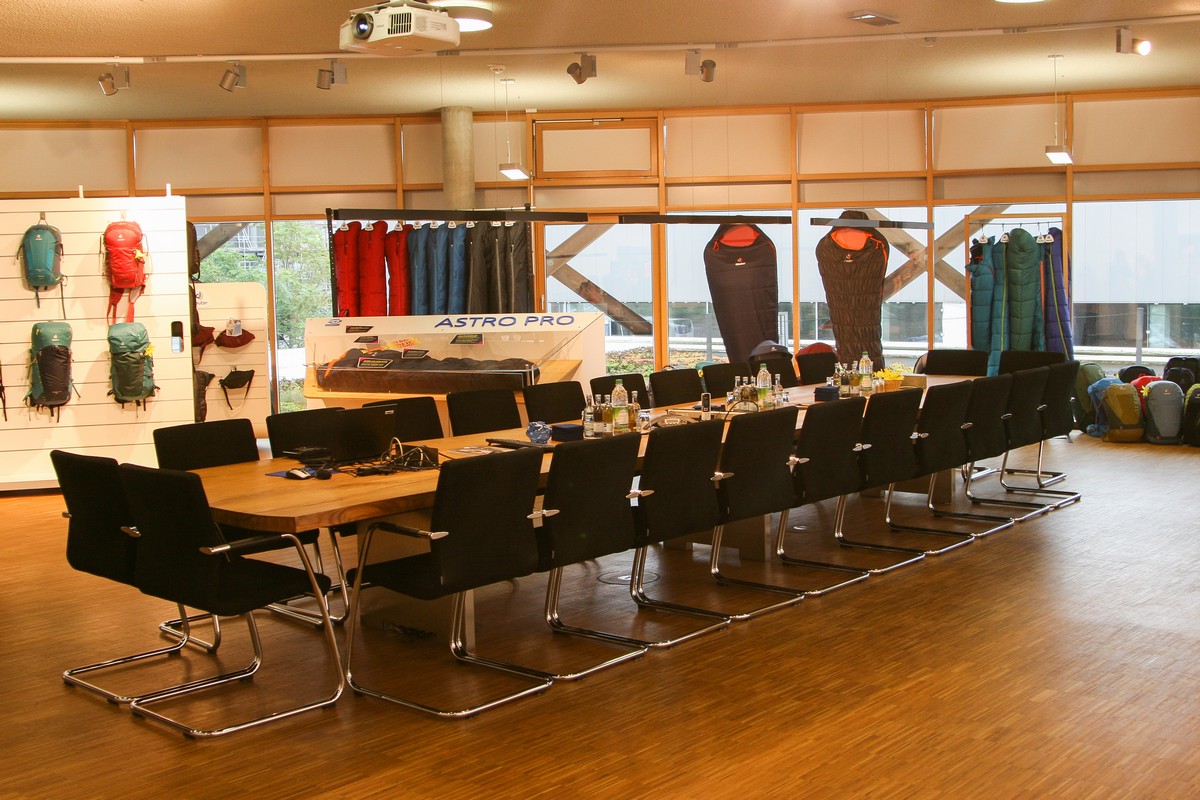 Then we went to the meeting room, where the brainstorming on the development of new collections tooke place, and for us there was another presentation. First, they talked about what they put into the meaning of all the products produced by the company, and then they showed step by step how the development takes place. Deuter, as a good modern European company, pays much attention to the protection and preservation of the environment, controls every stage of the creation of backpacks, from the method of manufacture and chemical components of materials to the comfortable environment of the company's employees in the factory and in the office.

Deuter creates also sleeping bags, but there are backpacks on the first place. Therefore we were told about all stages of creation backpacks. The company adheres to the production cycle of 3 years: from the idea to the implementation of the first batch of backpacks. Models during this time are repeatedly tested and finalized, but a lot of work remains behind the scenes. Because it takes a huge amount of resources, both human and material, to pick up the actual colors for future seasons, to find materials suitable for all characteristics and to ensure the uninterrupted supply of them. 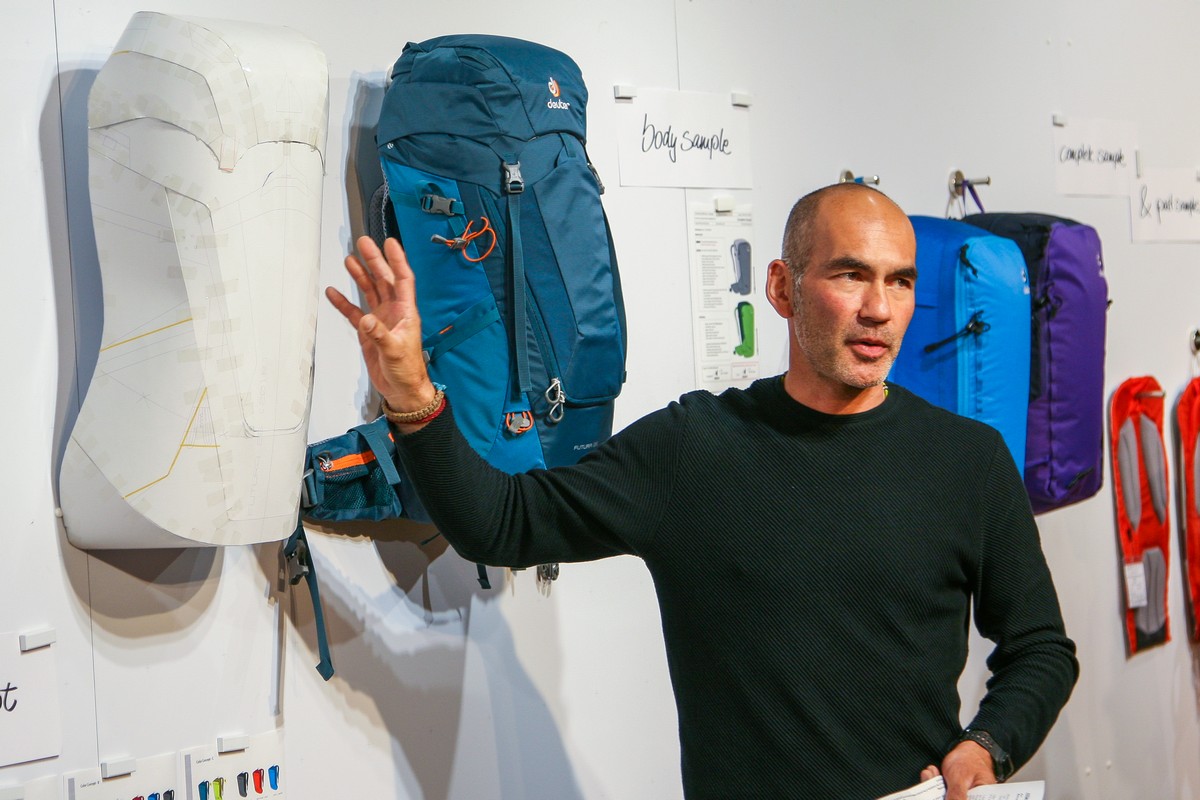 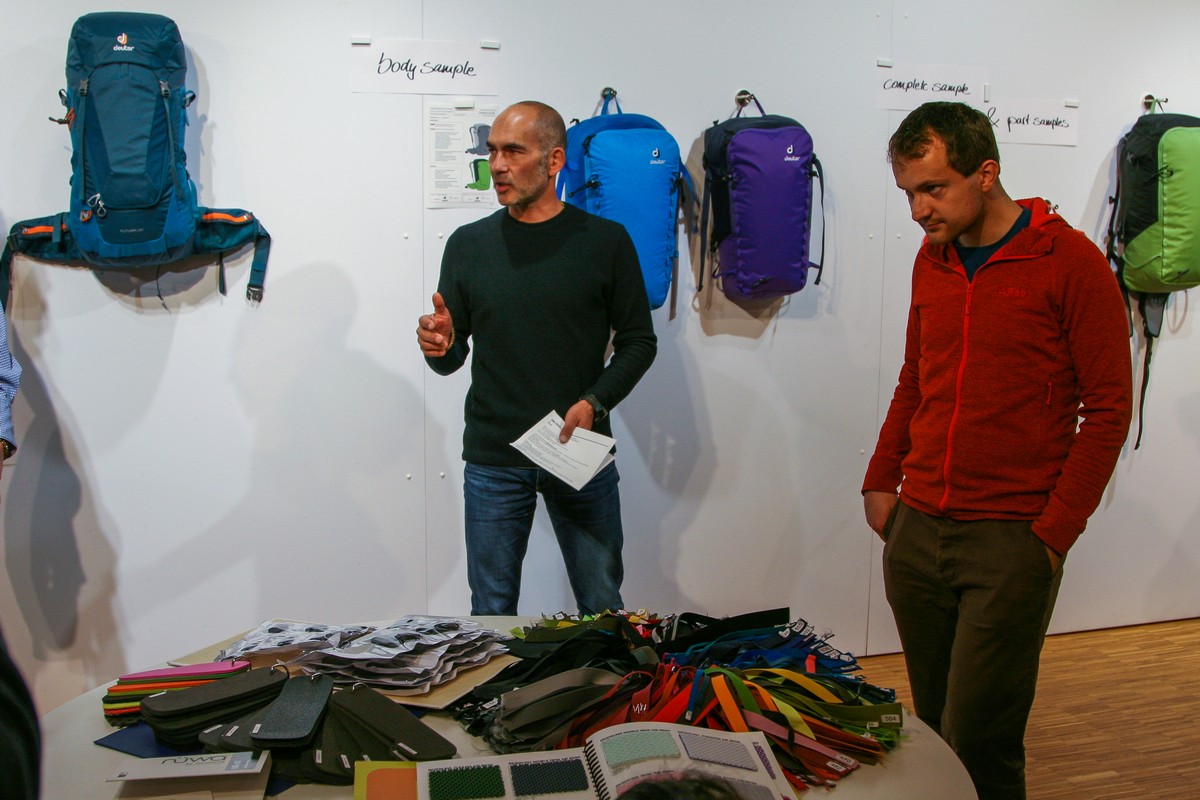 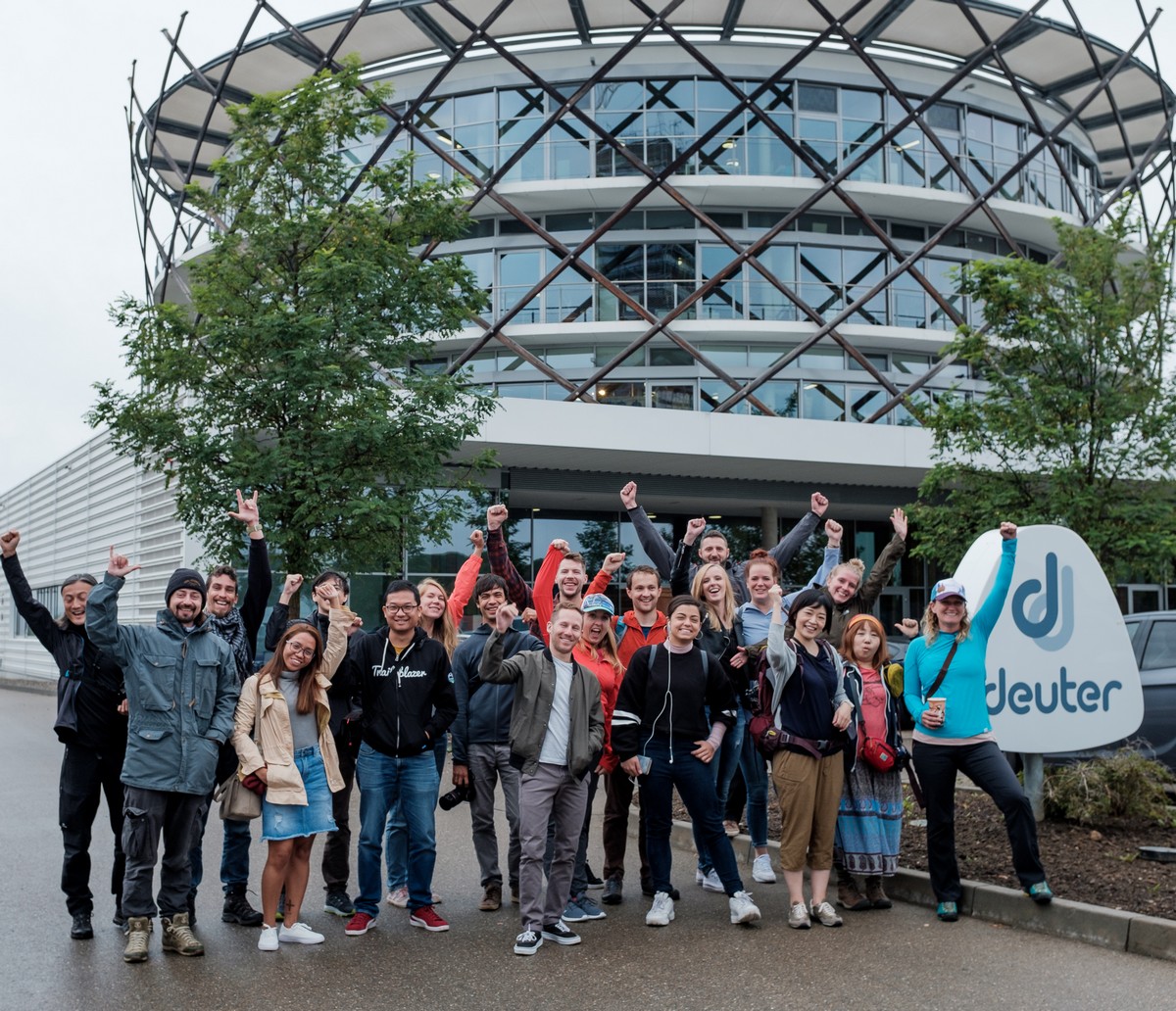 When we see the finished backpack on the shelf it seems to us that it is simple «invented - sewed», but in reality there are years of work of a large number of passionate people behind of all of this. Talking about art, people talk about everything that is associated with a particular work. So, a simple black square becomes a masterpiece of painting. But when we talk about goods intended for general consumption, on the contrary, it is not accepted to tell what is behind them. It's in vain, in my opinion, because after visiting such companies you start looking at things differently.

Of course, I will not call backpacks or any other equipment as masterpieces, but I'm more than sure that all of this products looks like a kind of art. Some people like paintings or sculptures, but I like things not only beautiful, but also practical, which I will use and enjoy.

I will write a few reviews for specific Deuter backpacks in the near future. One of them I've been using since the time of instruction in the Altai, the other two I managed to test during a trip to Germany, which will be discussed in detail in the next article.

Partial or full copying and reproduction of the materials of the site without the permission of the owner is prohibited. Persons guilty of copyright infringement are prosecuted

Found a typo?
Select it and press
Ctrl + Enter